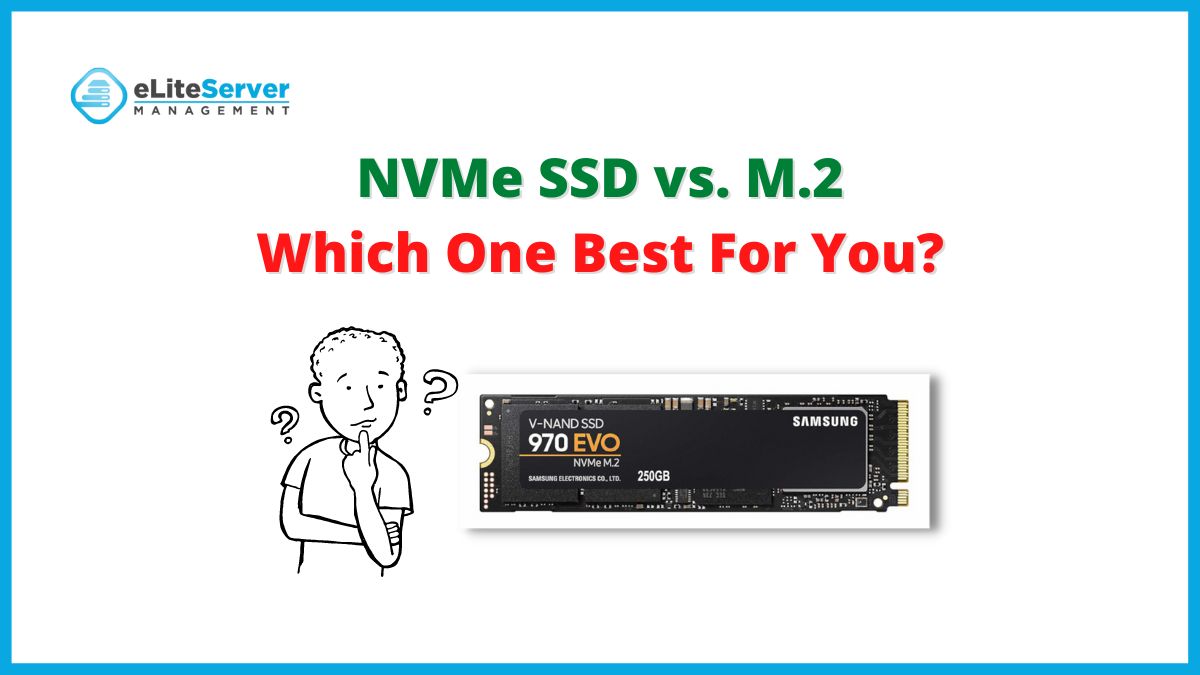 How To Choose Right SSD: NVMe SSD vs. M.2

Are you planning to upgrade the drive of your computer from the traditional HDD to the modern SSD? If yes, you’ve probably seen that two types of SSDs are available in the market: NVMe SSD and M.2.

Although both are SSDs (solid-state drives), they come with significant differences between them. To help you out, we’ve created this post on NVMe SSD vs. M.2, mentioning all the major differences. Once you complete reading this post, you should be able to choose the right drive for you.

Before we delve deeper into the battle of NVMe SSD vs. M.2, it’s important to have a clear idea of each of them. So, let’s see brief overviews of NVMe SSD and M.2 first.

What Is NVMe SSD?

NVMe stands for Non-Volatile Memory Express. First appeared on the market in 2013, NVMe is an open standard built to let modern SSDs function at the read/write speed according to the capacity of their flash memory.

The beauty of NVMe lies in the fact that it lets the flash memory function as an SSD straight through the PCI Express (PCIe) slot on your computer’s motherboard rather than utilizing SATA and being restricted by the slower SATA speed. As the SSD can directly communicate with the CPU, it minimizes program load times and increases read/write speeds.

So, NVMe is an interface protocol that stands for the method through which data is transferred. Depending on the manufacturer of your NVMe drive, you may experience five or six times faster speeds compared to a SATA-based equivalent.

It’s important to note that transfer rates are primarily reliant on the generation of the PCIe that’s being used by your NVMe drive. Presently, the highest speed for a generation 4 NVMe PCIe SSD can go up to 7,500MB/second, while a generation 3 NVMe PCIe can reach a maximum speed of 3,500/second.

M.2 is the most recent form factor for SSDs that can be plugged directly into your computer’s motherboard without requiring any additional cables. M.2 SSDs appear in notably smaller sizes than 2.5” traditional SSDs. They’ve become sought-after options for gaming setups as they consume less space.

Despite their smaller sizes, M.2 SSDs can hold an equivalent amount of data as other SSDs, and their storage size can go up to 8TB. Note that you can buy M.2 SSDs in NVMe versions and SATA versions. The difference between the versions signifies the bus they utilize to communicate with your computer’s other components electrically.

Because of this versatility, an NVMe M.2 SSD can provide up to five times greater bandwidth compared to a SATA M.2 model. This essentially helps your computer deliver better performance for compression, decompression, transcoding, photo or video editing, and file transfers.

Now that you know the results of the NVMe SSD vs. M.2 battle, let’s try to understand if you should buy NVMe SSDs or M.2 SSD. We’re going to discuss the key factors that you need to consider when deciding NVMe SSD vs. M2, which is better for you.

In the context of the drive speed, you should note that 2.5” SSDs and SATA M.2 drives offer the same speed level. As mentioned above, whether you choose an NVMe SSD or M.2 SSD, the speed will remain the same depending on the PCIe generation.

Although you’ll have much faster performance with NVMe SSDs than with SATA drives, your computer’s processor might also need an upgrade to maintain that level of performance. Also, be sure to review the read/write speeds on the drive because NVMe drives of some earlier generations may provide different speeds.

While you can find some NVMe drives that can be plugged into standard PCIe motherboard slots similar to a graphics card, the majority of NVMe drives these days utilize the M.2 form factor. So, if you consider NVMe SSD vs. M.2 in the context of size, in most cases, there isn’t any difference at all.

The width of an M.2 slot is 22mm, and its length can vary based on your computer’s motherboard slots. The measurements may vary between 16mm and 110mm (the majority of drives come with a length of 80mm). Before you buy the drive, you only need to ensure that your device has enough space for it.

Again, there’s no significant difference between the prices of NVMe SSDs and M.2 SSDs. For instance, if you want to buy a 500GB NVMe SSD, you’ll need to pay anything between $70 and $160. The only difference is that the lower side of the cost may go down to $50 in the case of an M.2 SSD.

Both NVMe SSDs and M.2 SSDs are commonly used in higher-end and mid-range pre-built desktop computers and laptops. So, there’s no significant difference between them.

As noted above, NVMe refers to the interface, and M.2 stands for the most recent form factor for SSDs. So, when you merge their powers, you can get a superfast SSD drive with almost zero visible footprints.

The factor that you actually need to focus on is whether you should buy an M.2 NVMe drive or M.2 SATA drive. If you want your computer to deliver standard performance, you can opt for an M.2 SATA drive. However, if you want to do anything that needs faster read and write speeds or need to get the maximum out of the computing speed, you should go with an NVMe drive.

Additionally, while some motherboards may have compatibility with M.2 form factor, they might not support NVMe. Therefore, it’s very crucial to ensure that your computer’s motherboard supports both before you buy an M.2 NVMe SSD.

Lastly, because of their faster data transfer rates, M.2 NVMe SSDs run hot sometimes. Therefore, it’ll be wise to have a good cooling solution for the computer before installing the SSD. It’s also a must to back up all your data before replacing the existing drive.

Hazel Wolfe
Hazel is content writer and blogger. She has vast experience in hosting industry. From Last 5 years he is writing blogs, articles, press releases for hosting niche. In free time she loves to cook.